Prior to 1914 Ottoman Turkey was ruled by the Sultan who not only exercised temporal authority but, as Caliph and spiritual heir of the Prophet, was the titular religious head of Islam. The Sultan's power was exercised politically through the Grand Vizier. Prior to the move of the Imperial court from the Topkapi Palace, across the Golden Horn to the new Dolmabahce in the middle of the 19th century, all power was centred at Topkapi which today remains an outstanding tourist attraction containing immense amounts of Ottoman treasures, the former barracks of the Imperial Guard, the Treasury, arsenal, harem and the throne room where the Sultan officially received foreign delegations.

The Ottoman Empire comprised many ethnic, political, linguistic and religious groupings and was tolerable towards these providing they stayed loyal towards the Sultan. It was however cumbrous and by the mid-19th century a combination of internal and external stresses on an antique infrastructure made it apparent that collapse of the Empire and Ottoman rule was imminent. The Sultan came under increasing pressure to introduce political reforms and in 1876 when Sultan Abdul Hamid II ('The Damned') succeeded to the throne he reluctantly accepted the 'Midhat Constitution' designed to limit his absolute power, but soon reneged and resumed absolute rule in 1878, holding onto power until 1908 when, after years of plotting by army officers and the professional classes, many of them exiled to western Europe, a group of the former, 'The Committee of Union and Progress' (popularly known as the 'Young Turks') sparked off a revolution, aiming for a more liberal regime, to restore the national pride of a nation generally dismissed as 'the sick man of Europe' and ensure effective government. The Midhat Constitution was revived and the Sultan agreed to initiate democratic elections. 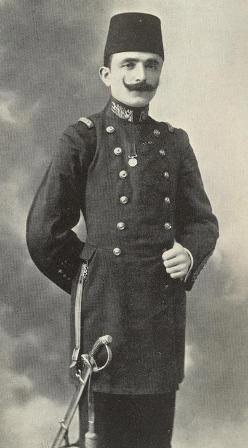 The Young Turks were headed by Enver Bey, a Macedonian army officer, later to become War Minister at a crucial time. Their political commissar was Mehmet Talaat , (1874-1921) destined to become Interior Minister. Two other prominent members of the junta were Ahmed Djemal (1872-1922) a future Navy minister, and Mehmet Djavid Bey (1876-1925) of Jewish origin, later Finance Minister. All these men were destined to die violently in the turbulent years following the collapse of Ottoman Turkey in 1918. Amongst many young army officers who privately sympathised with the movement was Mustafa Kemal,born in Salonika in 1881 who, though suspected by the ubiquitous secret police of dissident activity, prudently kept his own counsel. He had his own agenda and was prepared to bide his time.

Despite the 1906 revolution the empire continued to fall apart. There was rebellion in Albania and attacks by Kurds and Bedouins on the German-built Hedjaz railway in Arabia . In the Yemen there were challenges from the Hashemite sharif of Mecca, contesting the Sultan's right as Caliph to control revenues from the Muslim holy places. Abdul Hamid was forced to abdicate in 1909 and his brother succeeded him as Mehmet V, but the empire's decline merely accelerated. In 1910 Crete declared its independence and in the following year a disastrous war with Italy (during which the Italian fleet bombarded the Dardanelles forts) led to the loss of Libya, Rhodes and the Dodecanese Islands. The Balkan War of 1912-13 revealed the courage of the foot soldiers but also the dismal performance of the old Ottoman officer class. It also led to a dangerous under-estimation of Turkish military prowess by the British and French General Staffs.

Turkey had now all but lost its last toe-hold in Europe but the defeats actually strengthened the position of the Young Turks. In 1913 Enver Pasha married into the Ottoman royal family (who privately regarded him as an upstart of low birth) and promptly instigated a Putsch which saw the assassination of the Grand Vizier, Shevket Pasha.

The events of the previous forty years had been studied with interest in Berlin where a golden opportunity to expand German influence was perceived. Kaiser Wilhelm II paid state visits to Turkey in 1889 and 1898. There had been a German Military mission at Constantinople since the 1880s; this was now strengthened at the request of Enver and the highly competent General Otto Liman von Sanders placed at its head, as Inspector-General of the Ottoman army.. Berlin's long term aim was to manipulate Turkey as a bastion of Islam and a lever against the British Raj in India and to prepare a springboard for operations against the Suez Canal, Britain's Imperial artery. German financial support was forthcoming - with strings - for the Constantinople-Baghdad railway. Turkish officers attended German Military academies and Turkish engineers and doctors were trained in Germany. The Germans made a point of appointing their best diplomats to their embassy in Constantinople.

Despite these developments Anglo-Turkish trade links remained strong; with a strongly pro-British and French lobby in high Turkish circles. Britain had long maintained consulates throughout Asia Minor, primarily to supply intelligence on Russian activities threatening the North West frontier of India. There was a large expatriate population in all the major cities, engaged in commerce and industry of every description. A British naval mission under Vice Admiral Limpus was reforming the decrepit Ottoman fleet in 1914, and much work had been done under his supervision to strengthen the seaward defences of the Dardanelles. Negotiations were in hand for the purchase, for the Ottoman navy, of two super-dreadnaughts from Britain originally destined for Brazil, and a national fundraising scheme was set up throughout Turkey; contributions poured in from all levels of society. Crews for these ships, the Sultan Osman I and Reshidye were sent to England in the summer of 1914 and it was a terrible shock when, on the eve of war in August 1914 Winston Churchill, as First Lord of the Admiralty, impounded and transferred them to the Royal Navy as HM Ships Agincourt and Erin, both of which would fight at Jutland in 1916.. As an act of Realpolitik it was logical but insensitive and did much to propel Turkey into the war on the side of the Central Powers. 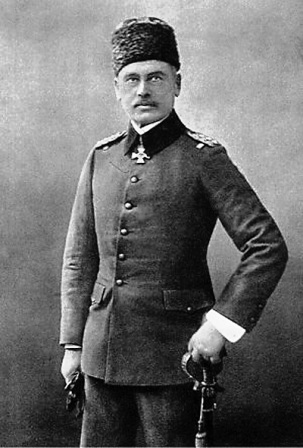 Throughout the summer of 1914 the German battle-cruiser Goeben and its escorting cruiser Breslau had been in the Mediterranean, Adriatic and Aegean, paying several conspicuous visits to Constantinople where they anchored off the German embassy, dressed overall and floodlit at night. They appeared without warning off the French north African ports on 2 August, bombarding them before heading for Constantinople, where they were handed over to the Turkish navy with their crews to compensate for the loss of the two 'British' super-dreadnoughts. Admiral Limpus and his mission were expelled from the Ottoman empire. Instead of being appointed commander of the Anglo-French fleet now assembling to blockade the Dardanelles, Limpus went to Malta as Superintendent of the dockyard, thus depriving the allies of a naval commander with profound knowledge of Turkish naval and military dispositions.

As Europe hovered on the edge of war Enver had concluded a secret Treaty with Germany without committing Turkey to immediate military action. This was signed on 1 August 1914. Under its terms, Turkey would enter the war as soon as Russia opened hostilities against the Central Powers. Within a year of his arrival in Turkey with his German training team, Otto Liman von Sanders, appointed as its Inspector-General, had transformed the Ottoman army, ruthlessly sacking idle and incompetent commanders, imposing Prussian disciplines and displaying great ability in spotting talent in the oncoming generation of young officers. The entrance of the Dardanelles was closed to international shipping, although Enver permitted the two German warships to enter following their escape from the Mediterranean fleet.