We are the foremost Association for the Gallipoli campaign who, with genuine passion and enthusiasm, help to keep its memory alive.

Our key focus today is education, in particular of the young of all those countries that once took part in this tragic campaign. By raising public awareness of the Gallipoli Campaign, encouraging and facilitating study, we keep the memory of the campaign alive, ensuring that all who served in it, and those who gave their lives, are not forgotten.

We have existed for over forty years, having been established by Gallipoli veteran Major Edgar Banner in 1969. From an informal group of veterans, meeting from time to time to exchange shared memories, they had very soon started their own Association Journal, 'The Gallipolian' was initially cyclostyled but, as membership increased, it became a properly printed magazine published several times a year, in which articles of high historical, academic and literary merit appeared. It is regarded as exemplary in its class. 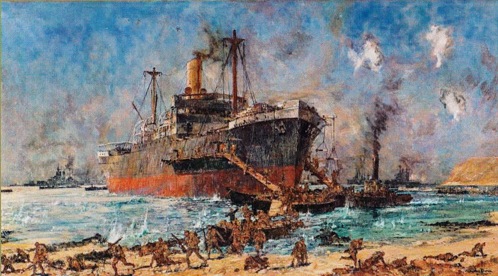 Left: The painting by Charles Dixon depicting the landing from the River Clyde at V beach on 25th April 1915 (Image credit: The Princess of Wales Royal Regiment)

The Gallipoli Association today is open to everyone worldwide. Many of our members are descendants of the veterans, but we also have an ever growing membership of professional and enthusiastic amateur military and family historians who, with the general public, are swelling our ranks.

In 1995, when it was clear that the remaining veterans deserved a fitting gesture in their lifetime and that a national tribute to those who had gone before them was long overdue, the Association called for contributions to fund a lasting memorial in the crypt of St Paul's cathedral, the Gallipoli Memorial plaque was unveiled by our Patron, HRH The Duke of Edinburgh in the presence of a great and distinguished congregation including what would be the last muster of the actual Gallipoli veterans. It is fitting that this memorial is mounted within a few paces of Lord Nelson's great tomb and close to that of the Duke of Wellington.

In 2015, we played a leading role in the Gallipoli centenary for the UK, and influenced several events around the world. One of the most poignant was the sending of fifteen members, who were descendants of the veterans, out to Gallipoli for the April ceremonies at the British, French and Turkish memorials. Trustees and members were also present at Gallipoli for the 18th March 2015 centenary event and those for the Anzacs on 25th April 2015. In the UK, and elsewhere around the world, we witnessed an amazing international turnout for the commemorations.

Today the Association works hard to achieve its aims, summarised below, and welcomes enquiries from all, young and old.

Membership of the Association continues to grow worldwide, and now stands at over 1,000. Strong links have been established with official and other interest groups concerned with the campaign, notably in those countries, such as Australia, New Zealand, Canada, France and Turkey, which participated significantly in the naval, land and air operations. The creation of this website in its new form will enable members to exchange information freely as well as to make enquiries concerning the participation of family members in this campaign.

Visits to the old battlefields and the Dardanelles are run by the Association and Bursaries awarded to schools and colleges, enabling students to go there to study aspects of the campaign such as the deeds of former pupils of their school or college or members of their own families. Sponsorships are also offered to individual not in full time education who wish to conduct a further study into various aspects of the campaign. Details are to be found in the 'Gallipolian' and on this site. Following these visits and the completion of their written reports, bursary winners are required to give presentations to an audience of their peers and of distinguished historians, and these have invariably attained a very high standard of research and delivery.

We are a registered charity (No.1155609) with the following Charitable Objectives :

To advance education for the public benefit by raising public awareness of the Gallipoli Campaign of 1915 and by encouraging and facilitating the study in the legacy and lessons of that Campaign, keeping alive the memory of the Campaign and ensuring that all who fought or served in it, and those who gave their lives, are not forgotten by applying such means as the Trustees deem fit.

COPYRIGHT NOTICE: Images used on this site are in the public domain or used with permission.

In particular we are grateful to The Princess of Wales Royal Regiment (Queen's and Royal Hampshires) for permission to use a representation of the painting by Charles Dixon depicting the landing from the River Clyde at V beach on 25th April 1915.