We had made a recess in which were laid three 10Ib tins of Ammonal. The sandbags that would normally have been c 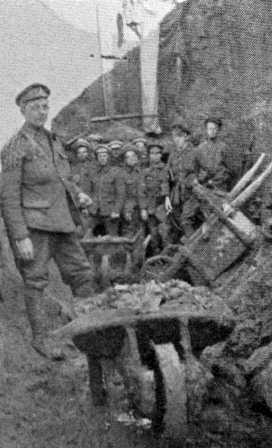 arried away were left for us to use as tamping. The detonators had been placed on one of the sandbags so that there would be no danger of pulling them from the tin during the tamping. Dozens and dozens of sandbags had to be carefully packed to ensure that the least resistance would be upwards; otherwise the force of the explosion would simply blow them away and we would completely destroy our own gallery and do absolutely no damage to the Turkish firing line some twenty-eight feet above.

At almost 3pm the men in the line were warned that we were going to blast and down went the plunger. With a terrific bang up went the mine and, with it, the Turkish front line. Our line trembled; huge chunks of earth fell everywhere from the cloud of dust that shrouded the entire sector. So for my part ended four very trying days of which every moment had been a nightmare.

The following day, 15 September, Murray was on duty again and went down the same British gallery to clean up and make safe the roof when all of a sudden their was darkness. The Turks has counter-mined and blew up the British gallery with Joe and friend Alec inside.

I could not for the life of me understand how the Turks had managed to spring their mine so soon. Only yesterday we had blown them sky-high from this very spot. Alec and I groped about in the dark, looking for our candles and matches. We found neither so decided to explore the gallery to ascertain where the explosion had occurred. The level part was reasonably clear. Several minor falls of roof had taken place but we had no difficulty in climbing over these obstructions to reach the rising part. From there we should have been able to see daylight, but we couldn’t. We knew that we were entombed but the gallery was still open. We groped our way up the rising gallery and at once realised we should not be able to go much further. Everywhere was broken up. Timber – not broken but dislodged – prevented any further movement up the slope and we did not know if this blockage was the seat of the explosion or only another fall. We tugged at the timber until we got it free. Quite a lot of earth came away with it which told us we had no more gallery left and our only hope pf survival would be to claw our way upwards through the broken earth, knowing full well that if it was too loose it would suffocate us. We estimated that we were at least twenty-five feet below the surface. I began to burrow, with Alex behind me heaving the lumps of clay down the eight feet or so of the sloping gallery. We changed over repeatedly and, as time passed, found it increasingly difficult to clear the earth away. The burrow behind us had closed in and the roof kept caving in. we were unable to extricate ourselves from the earth we had clawed away and the constant failing of the roof altered our direction. Twisting and turning in an effort to free my lefg, I fancied I saw daylight from a fraction of a second. Alec did not see it, but believed me. With new hope we struggled on; our time was running out and we both knew it. Again and again we were completely buried but, in time, managed to clear ourselves.

In one last super human effort both Joe and Alec miraculously reached the surface. Mining and countermining was to continue throughout the campaign, of which we will read more later.