GALLIPOLI LANDINGS - On 21 April 1915 Sir Ian Hamilton, commander-in-chief of the Mediterranean Expeditionary Force (MEF) issued his orders to the waiting troops. Unfortunately bad weather was to delay the landings for a few days longer, however the whole world would be watching, including the Turks! 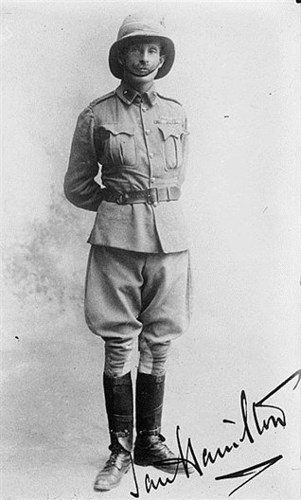 Soldiers of France and of the King.

Before us lies an adventure unprecedented in modern war. Together with our comrades of the Fleet, we are about to force a landing upon an open beach in face of positions which have been vaunted by our enemies as impregnable.

The landing will be made good, by the help of God and the Navy; the positions will be stormed, and the War brought one step nearer to a glorious close.

"Remember," said Lord Kitchener when bidding adieu to your Commander, "Remember, once you set foot upon the Gallipoli Peninsula, you must fight the thing through to a finish."

The whole world will be watching your progress. Let us prove ourselves worthy of the great feat of arms entrusted to us.