On April 18 Major-General W T Bridges issued Operational Order No. 1. (See below) From his base on the Minnewaska the ANZAC force commander issued the specific details of the landing of his forces, which was to come exactly a week later.

Point 1 of the order finished with the sentence that: The Australian and New Zealand Army Corps will land north of KABA TEPE – the landing will probably be opposed.

Point 2 gave more specific detail of the landing point and the first objective of the force: The Division will land between KABA TEPE and FISHERMAN’S HUT. Its first objective will be the occupation of the ridge extending from Sq. 212(i) to point 971 in Sq. 238(m).

Colonel Henry McLaurin commanded the 1st Brigade at the landings, but was unfortunately killed by a sniper on April 27. The map that he carried ashore survives and is in the Australian War Memorial, and part of it is shown below. From it you can see the meaning of the map references in squares 212 and 238. Anzac Cove, Ari Burnu and North Beach are all half way between Kaba Tepe and Fisherman’s Hut, and the map references are the ridge (the first objective) which runs north from behind Kaba Tepe to Hill 971 and includes The Nek and Chunuk Bair.

So the ANZACs landed just where their orders said, but struggled to take and hold their first objective. On May 7 they produced the ‘Report on the Operations of the First Australian Division.’ Page 2 said: ‘The position at which the landing was effected lies in Square 224 (g) and (l), and was about 1 3/4 miles north of the intended landing place.’ Map Square 224(g) and (l) is certainly where they landed, but 1 3/4 miles south is Kaba Tepe! It was ruled out after it was observed from HMS Queen on April 14, when Colonel Sinclair-MacLagan noted that: “If that place is strongly held with guns it will be almost impregnable for my fellows.” Its strong defences and field of fire were further confirmed from the air by Charles Samson and others, but rumour and scuttlebutt were now blaming the move north on a mythical current.

General Sir Ian Hamilton wrote of Birdwood and his forces in his ‘Gallipoli Diary’ in 1920 saying that: “He has no currents to trouble him, it is true” but the story of the current got stronger with repetition by others. Six years later out came ‘Gallipoli Today’ by T J Pemberton, and Ian Hamilton wrote the introduction for it. He referred again to the current: “No doubt exists in my mind that the official history will give it a death blow” Ospinall-Oglander finished ‘Military Operations, Gallipoli’ in 1929, but there was no death blow to the mythical current and it went down in history. Order No.1 was filed away and the current became the best known and accepted Australian ‘untruth’ of the Great War. 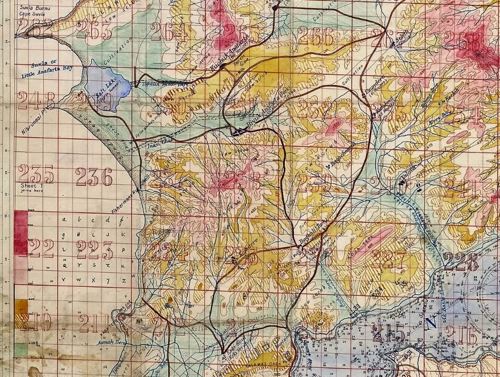 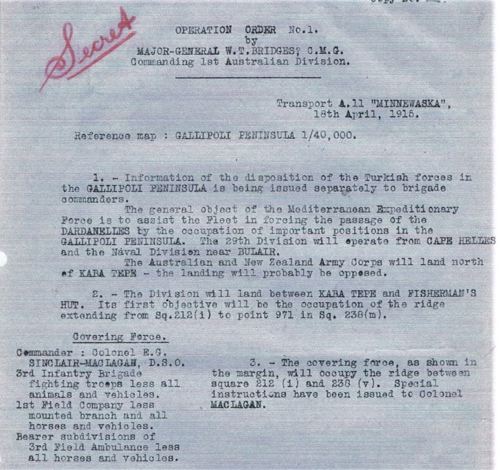