HELLES LANDING - As the River Clyde made her slow journey to Helles on the night of 24 April time weighed heavily for young men about to risk their all for their country. Whatever their commanders may have thought, many of them realised that they were about to undergo a severe ordeal that might well be the end of them.

It was not a cheery prospect. Among them was Captain Guy Geddes of the 1st Munster Fusiliers, 86th Brigade, 29th Division

"I felt we were for it. That the enterprise was unique and would demand all I was possible of giving, and more. That it was no picnic but a desperate venture. I just longed to get on with it and be done with it. I felt I was no hero and that I had not the pluck of a louse. My nerves were tense and strung up, and yet. I never doubted that we would not win through, because I knew the splendid fellows at my back, highly trained, strictly disciplined, and they would follow me anywhere."

ANZAC LANDING - As the ANZAC Corps set off for Colonel Ewen Sinclair-MacLagen was aboard the destroyer Colne. He was the man in command of the 3rd Australian Brigade and thus charged with the task of making the first landings north of Gaba Tepe and then covering the landings of the main force. It was a grevious responsibility. 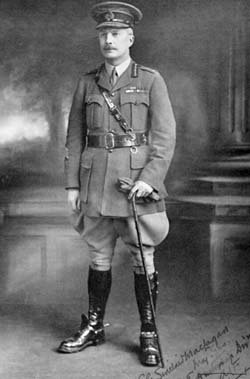 "The commander of the destroyer Colne gave me his bunk, but I simply could not sleep. Although I knew that all the orders for the operations had been clear and most carefully thought out, had we, the Brigade Staff, provided for any and every eventuality? How was Brigade Headquarters to keep in touch with the units of the Brigade scattered over a 4,000 to 5,000 yard front and on foot? If opposition was even only moderately serious, could units keep touch with one another? Was the reserve battalion placed the right position? Were the 'poor' maps issued to us accurate enough to be depended on, especially for the naval covering fire? If that was wire-entanglement in the water [on the] north shore of Gaba Tepe, could the men get through it, or would they be drowned and so leave my right flank open? How could I replace them from the reserve? These and many other thoughts of a similar nature kept me wide awake until we got into the boats for the last few yards to shore."