SUVLA - Lieutenant Norman King-Wilson, 88th Field Ambulance, RAMC and Surgeon Lieutenant-Commander Albert Gilbertson, HMHS Reha (See photo) - For IX Corps, stretched as they were across the open Suvla Plain, this was a disaster. The ground was white with snow and the trenches up to waist deep in icy water. There were over 200 fatalities and the medical officers and their stretcher bearers had the near impossible task of dealing with over 5,000 casualties suffering from frostbite and hypothermia. Lieutenant Norman King-Wilson was with the 88th Field Ambulance, RAMC. 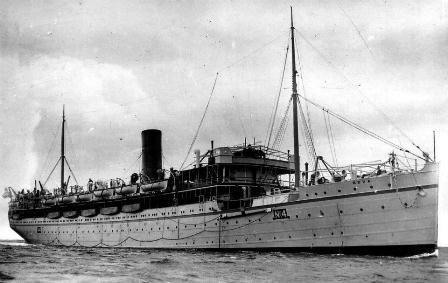 "Passing on to the aid posts I passed scores of men on their way down to the beaches, hobbling along, their feet tied up in puttees. The nearer to the trenches, the worse the sights grew. At the relief station hundreds of men were having their feet rubbed in oil and being given food. Their poor feet were swollen to double their normal size, blue and stone cold. The pain must have been frightful, but seldom did one hear a groan. The small aid posts in the trenches had some shocking cases brought in. Some frozen and unconscious, some quite drunk, for they had consumed large quantities of rum to keep warm. Some lying prone in the mud, dead. Others lying on top of the parapets, frozen in. Oh God, it was pitiful! As the day wore on, more and more men with frozen feet came hobbling down, some with rifles as crutches, some crawling, others being assisted by pals nearly as crippled as themselves. One officer with frozen feet was making his way slowly across the mud flat to our dressing station. He asked two others who were with him to go on, and sat down in the mud. They went on sending back bearers. When the bearers reached him, he was dead - of cold and exhaustion."

Back at the dressing stations the medical teams were all but overwhelmed by the numbers requiring treatment. By the time the sick could finally be evacuated many of them were in an awful state as Surgeon Lieutenant-Commander Albert Gilbertson saw when the victims were brought aboard the hospital ship Reha

"The majority could only just crawl up the ladder, dozens tried, failed and had to be carried; they came on mouths open, gasping, faces bluish, grey eyes glazed. Many of those who could stumble had to be led, as they just walked automatically, their clothes frozen stiff. I shall never forget the experience. We got them all below into cots filled them up hot soups and Bovril and piled blankets onto them. Heaps had badly frostbitten feet which as they warmed up gave them great pain. We had frostbite in all stages. I was going until midnight, wrapping up feet in cotton wool."