ANZAC - The Turks received a large reinforcement when their 2nd Division reached Gallipoli on 16 May. The new reservoir of manpower gave them a numerical superiority that reached the dizzy heights of two-to-one. The temptation was too much and with Enver's approval a general night attack was ordered along the line, with the 2nd Division to act as a battering ram in the centre of the 19th, 5th, 2nd and 16th Divisions to smash through the apparently vulnerable Anzac lines and sweep them into the sea once and for all. 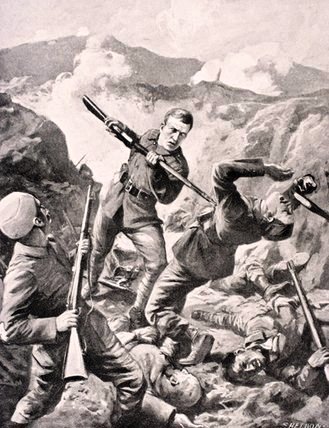 The mass attack was planned for 03.30 on the morning of 19 May. Unfortunately for the Turks, the Anzacs knew they were coming for it was difficult to conceal such large-scale troop movements from reconnaissance aircraft. When the Turks began a long slow barrage at 17.00 the previous day, the warning orders were sent out and the Anzacs were ready and waiting. Amongst them was Corporal Thomas McNamara of the 11th (Western Australia) Battalion:

"A deep brooding silence reigned, broken only at intervals by the faintest rattle of accoutrements or a quietly muttered word. The shadowy outline of the head and shoulders of one's neighbour intensified the unreality of the scene, due to the lines of his body being lost in the darkness of the narrow trench which the faint cold light of the morning stars failed to penetrate. At long last word passed from mouth to mouth, uttered quietly as though we were afraid to speak, that the outposts had come in and that 'Jacko' was on the move. One experienced a slight involuntary shiver that might have been due to the chill morning air, a tingling, creeping sensation at the base of the skull which passed down the spine and thoughts which had moved sluggishly now took on a racing pace. Would the impending attack succeed? Would bayonet work be necessary? One tried to picture what was going on out there, seeing in the mind's eye, figures creeping, creeping stealthily in the vain hope of catching us unprepared."

This was their chance for revenge: the waiting was over, now for the slaughter.

"From flank to flank the darkness was stabbed with licking flashes of cordite and the stutter of machine guns joined into the harsh discord of the rifle fire and the hard smack of field guns. Shells screamed overhead, and when they burst with a crash the upper darkness was pierced as with fiery breath and with a high pitched, droning whine the shrapnel pellets came to earth. The air was filled with dust and acrid fumes."

In some places the sheer weight of numbers made it a close run thing. At Courtney's Post the Turks did, just for a moment, manage to break into the front line, thereby threatening the whole of the Anzac position. Here they encountered the redoubtable acting Lance Corporal Albert Jacka - a man it seems of few words.

This dry diary note concealed the dreadful confusions of pitch-black night fighting in the complex twists and turns of the trenches at Courtney's Post. Jacka had set a small group of men firing and throwing bombs to create a diversion while he manoeuvred himself behind the Turks to launch the sudden vicious attack that swiftly overwhelmed them. This would earn Albert Jacka the first Australian VC of the war.