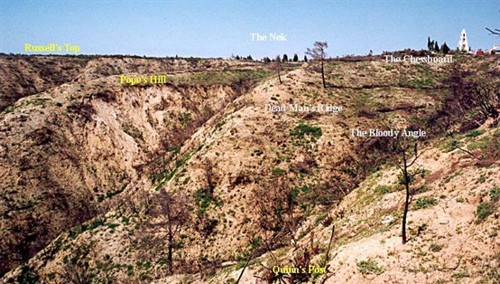 "We fired away at all the Turks who kept advancing. They were then about one hundred and fifty yards away and they came up in almost mass formation so we had very easy targets. An Australian came and lay next to me and on his right another man scaled this steep slope and it turned out to be Major Armstrong of the Portsmouth Royal Marines. Captain Richards was next to him and all the way to the right were men shoulder to shoulder lying on the ground. No cover at all, just lying on the ridge." (Private Harry Baker, Chatham Battalion, Royal Marine Brigade, RND)

As the Turks attacked from their front the complex nature of the landscape allowed a German machine gun in German Officers Trench, just north of Wire Gully, to get a clear enfilade shot at the men lying on the open ridge facing the Chessboard.

"Suddenly a machine gun crackled away at right angles to us, we were firing ahead and it was even behind us. This machine gun went along and that killed every man on the ridge except the Australian and me. We were the only two left. The Australian said, "The bastards can't kill me, they've had lots of tries, they can't kill me!" I looked again. The machine gun started barking again behind us. That came along it was knocking the sand up and that covered every men again. Every man, it came right along. I felt the bullets thud into the Aussie and he never spoke again. I felt as though I'd been hit by a donkey and I had a bullet through the right foot. When I saw those bullets coming along and I knew that it would be the end of me if they came along far enough. They say your past comes up but I can say truthfully that I hadn't got much past at nineteen and all I thought of was ' Am I going to live', that's all I thought, that's what struck me, 'Am I going to be lucky', because I couldn't see how I could be with all these bullets coming along and I waited for it - it was inevitable." (Private Harry Baker, Chatham Battalion)

Luckily for Baker the machine gun stopped after the bullet had slammed into his foot. However he wasn't out of trouble yet. Even as they were destroyed from behind the Turks in front charged forwards to over-run their position.

"I lay there and I didn't know what to do. The Turks came and prodded various men with their bayonets, fortunately they didn't poke me, and I could hear them jabbering away and then they moved away again. "Well," I thought, "I must do something!" so I gave myself a push off and went bumpity-bumpity right down to the bottom of the ravine over dead men, rifles, bush, all kinds of things." (Private Harry Baker, Chatham Battalion)

Baker was eventually rescued and evacuated. The corpses of his comrades lay up on the ridge, rotting and turning black in the hot sun for the rest of the campaign. It became known as Dead Man's Ridge. I have played this recording many time on battlefield tours, stood overlooking Bloody Angle and Dead Man's Ridge and looked back to German Officer's Ridge where the machine gun fire came from. A very strange feeling, that someone I knew had experienced such horrors there so long ago.