Brigadier General John Monash, 4th Brigade, A&NZ Division, AIF - Meanwhile one of the great Australian soldiers was beginning to attract attention and on 24 July John Monash had news from Birdwood that he was promoted to Brigadier General. In fact he had heard unofficially three days earlier from an unusual source - his wife! 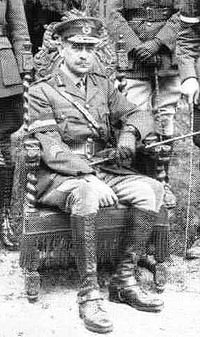 "This afternoon there arrived your cablegram dated from Sydney on 10 July as follows: "Congratulation on promotion to Brigadier General well love." This cable was the greatest surprise to me, and the information it contained was absolute news. I feel sure you would not have cabled if you had not had the most substantial reasons for believing it to be true. There has so far been nothing in our force or corps or divisional orders about any such promotion. In point of fact, I understand that, although the War Office was favourable to the promotion of Australian brigadiers, the Australian Government objected. What appears to have happened is that, yielding to further strong representations by Kitchener, Pearce decided to give way, and that the promotion has been made and gazetted in Australia, and that the news of it has not yet filtered through to here."

Monash was not kept on tenterhooks long. And so it was that on 24 July he got the official confirmation that he was henceforth to be Brigadier General John Monash.

"This morning Lieutenant-General Birdwood came round into my section to congratulate me personally on my promotion. He spoke as if he were genuinely pleased and was good enough to say that if anybody deserved the honour I did. This confirms the information in your cable of 10 July, received a few days ago, and was the first local intimation I have had. It soon got about, and congratulations flowed In from all over Anzac. My staff set to work, and by some mysterious means managed to materialize for me a pair of new shoulder badges all ready to put on when the formal, announcement is made."

Monash would rise to Lieutenant General in command of the Australian Corps by 1918.