HELLES - One of the greatest difficulties faced during the last weeks was in maintaining the embarkation facilities to allow the maximum number of men to leave the peninsula each night. Lieutenant G. M. C. Taylor of the 3rd Engineering Field Company, RND, had been detached from his division and sent to W Beach to help restore the piers and breakwaters immediately after the great storm in November. Four piers had been constructed leading off W Beach with two old hulks sunk to form a rough mole around the northern side. 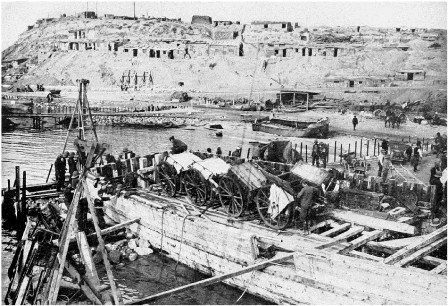 Taylor's job in December had been to build a breakwater of large stone blocks parallel to, but outside, No.1 Pier to get out to two ships that had been sunk and thereby close in the harbour. But by the time the decision was taken to evacuate the work had not been completed.

"Our breakwater was not finished and we had a gap of about 200 feet. No ship of any size could come alongside any of the piers so troops would have to get into barges & lighters & be taken out to the transports. If our breakwater had been completed we would have run out a light pier or bridge to the hulks and troops could have marched over to the outer hulk which was in deep water & could berth large ships. The navy produced an old Greek ship and said they would sink her and close the gap in the breakwater. They did it at night and to our horror in the morning we found it really did more harm than good as it diverted waves on to the line we wanted to bridge." (Lieutenant G. M. C. Taylor, 3rd Engineering Field Company, RND)

Something had to be done to overcome this problem and allow the troops to embark directly onto the larger ships moored to the hulks.

"I was given the job of building the floating bridge. It was in 6 sections 30 feet long and a sloping gangway up the side of the inner hulk alongside which came ships that would hold 2000 troops each."

Taylor on his men would struggle hard in these last few days but finally by 7th January, it was ready.