The following article appeared in the Revue Israélte d'Egypte, dated 15 Avril 1915: ZION MULE TRANSPORT CORPS - […] This corps is made up of 500 volunteers, including 350 Palestinian refugees and 150 Alexandrian Jews. Colonel Patterson is the commanding officer of this corps and among the officers mentioned are Messrs Claude Rolo and Ibram Rolo, who belong to one of the best Jewish families in the country. This Corps has been mobilised, and the best men of Judaism are accompanying it. 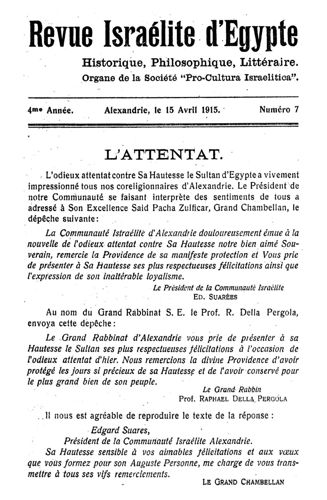 Throughout its history, Alexandria has already borne witness to aspects of high moral and political importance, and - for the first time in twenty centuries - is the cradle of a brand-new manifestation in the history of Israel. Jewish soldiers forming a unit of their own, wearing the Star of David on their helmets, following a flag with the Star of David, having the Red Star of David as an insignia on their uniform and ready to sacrifice their lives for the universal humanitarian ideal of justice and peace.

H.E. Prof. R. della Pergola, the Chief Rabbi, distributed to the soldiers of the Zion Mule Transport Corps a small pamphlet in Hebrew containing valuable advice about obedience, discipline, military spirit, dedication, as well as faith and duties as an Israelite.

We are pleased to reproduce below the speech that Colonel Patterson has had translated into Hebrew for the soldiers of the Zion Mule Corps:

The Commanding Officer is keeping a book, which will be a Roll of Honour. All Officers, non-commissioned Officers and Men, who do well and specially distinguish themselves, will be entered in this book. and their names will be made known to the Jewish Community of Alexandria, Jerusalem and every big city throughout the world. It will be a special distinction to be mentioned in this book and Colonel Patterson hopes he will be able to inscribe many names on this Roll of Honour. Another book will be kept and will be known as the book of the dishonoured. All men who disgrace themselves and the Zion Mule Corps, their names will be sent to the Jewish Community of Alexandria, Jerusalem and all the big cities of the world. Colonel Patterson hopes it will not be necessary to enter any names in this book, because he would regret to have any man so dishonoured throughout the world. It is now 2000 years since a body of armed Hebrews, have been recognized as regular soldiers, and for this reason the eyes of the world are to-day centred on the Zion Mule Corps. It is not sufficient that the Zion Mule Corps does as the British soldiers: every soldier must do more, so that he may show the world that the Hebrew is a soldier and a man, and capable of fighting for, and winning a home in his Promised Land.

At the end of the meeting that took place last Sunday, the Municipal Council decided to send Colonel Patterson a copy of the minutes of the meeting, as well as the following message:

Colonel Patterson, Council of the Jewish Community of Alexandria in meeting today, deeply moved, votes enthusiastically, heartiest wishes for the success of your arms, your triumph in all undertakings, and God speed you. They beg you to transmit their fraternal greetings to all officers non-commissioned officers and men of your corps, and add their heartfelt thanks to you personally for all your pains and for the interest shown individually to those under your able command. EDGARD SUARES, President

THE FLAG - Colonel Patterson expressed the wish to have a special flag for the Zion Mule Corps. As several ladies have indicated that they would like to participate in its making, we are pleased to inform our readers that this flag will be made at the Atelier des Ecoles Communales. All Jewish ladies and girls who wish to help with the embroidery, can register with or send their card to Miss Eveline Loria, Director of the Atelier, who will let them know the days during which work will be allocated to them. 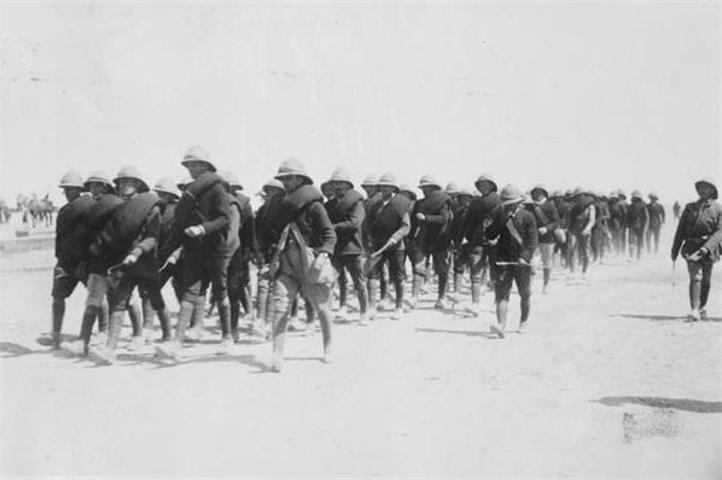