Following a request from GA members in Germany, the Gallipoli Association Chapter (Germany) held its inaugural meeting in Heidelberg in July 2021, under the acting chairmanship of Thomas P. Iredale. A local Chapter is a community of active Gallipoli Association (GA) members, who are based around a certain area (city, region or country) and collaborate with the Association to promote its objectives, which are: “To Remember, To Honour, To Study”. These local Chapters feature talks or events of particular interest to that community.

After welcoming everyone, the acting Chairman invited Klaus Wolf to give a briefing on the quest to have a German memorial erected somewhere on the peninsula. Klaus described the original German memorial, cemetery and encampment on Kilia Tepe and the subsequent re-interment of the bodies to the German Military Cemetery in Tarabya (Istanbul). Both memorial and cemetery were destroyed in the 1930s by the government of the Third Reich, thus eliminating any trace of the Germans on Gallipoli. The present political situation between Turkey and Germany is a barrier to this quest, not helped by the disinterest of the present German government. A new approach is required, possibly through a cooperation between German and Turkish Universities. Klaus will keep the Chapter informed of any developments. 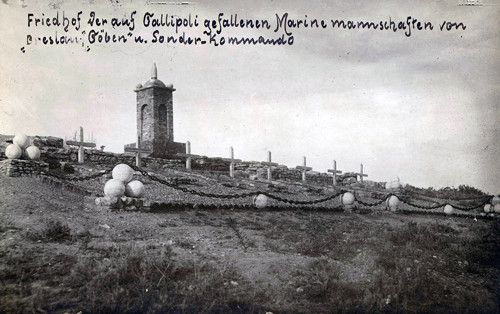 Following on from this, Thomas Iredale gave a short presentation on “The German Military Cemetery in Tarabya (Istanbul)”. This cemetery is located in the grounds of the summer residence of the German Ambassador to Turkey. It is the central cemetery for all the German fallen in both World Wars. Amongst those buried here are Field Marshal von der Goltz, on whose grave Kaiser Wilhelm II laid flowers in 1917 and the Turkish Army commemorate him on Volkstrauertag (Remembrance Sunday) every year. There is a permanent exhibition of the campaign “Through German Eyes” set up by the Kriegsgräberfürsorge (German War Graves Commission) in a building near the entrance to the cemetery. Also on Volkstrauertag , there is a commemoration and wreath-laying ceremony here, attended by NATO military representatives and at which, the German Consul-General gives the address. In 2019, the GA also laid a wreath. Visiting is only by prior appointment via the German Consulate in Istanbul.

The final talk of the meeting provided a direct German personal link to Gallipoli.  Jochen Schrader gave a short talk on his grandfather Oberstabsgefechtsschreiber (Senior Navy Writer) Wolfgang Schrader, who kept a diary and took photographs throughout the campaign. Wolfgang was born and educated in Istanbul and spoke the relevant languages in daily use in the city. The First World War saw him drafted into the German Navy, where his linguistic skills in both German and Turkish provided communication between these two allies. In July 1915, he landed on the peninsula and was assigned to the U-boat station “Hersingstand” in the Gulf of Saros, named after U-21’s commander, Otto Hersing. In January 1916, he was witness to the evacuation of the allies and able to “partake” in the vast supplies of stores left behind. After Gallipoli, Wolfgang Schrader remained in naval service in Istanbul and was repatriated in early 1919. 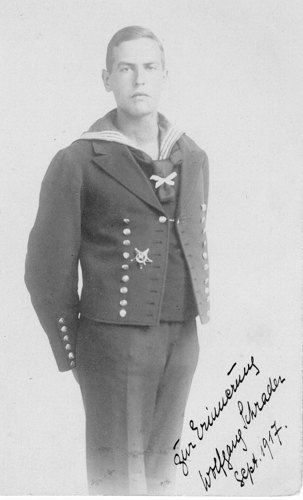 Following some discussion, it was agreed that the next meeting should be held in November 2021. Before closing the meeting, the Chairman once again thanked Axel von Schellenberg for his hospitality in hosting the event at his residence.

[Note: The Trustees of the Gallipoli Association will consider requests to establish local Chapters and provide guidelines.]