An Appreciation of our Patron

The history of the His Royal Highness The Duke of Edinburgh's interest in the Gallipoli Campaign stretches back a long way to the time when he accompanied Her Majesty The Queen on a State Visit to Turkey, together with HRH The Princess Royal during which they visited the Gallipoli battlefields in October 1971.  Her Majesty sent a telegram message from Gallipoli to our then chairman and founder, Major Edgar Banner, from which it was clear how deeply moved they all were by their visit.

A few years later the trustees of The Gallipoli Memorial Trust, a well-respected organisation which wound up many years ago, invited His Royal Highness to give their annual Memorial Lecture which used to take place in Holy Trinity Church, Eltham where there is a Gallipoli Memorial Chapel.  These lectures were on a high academic plane and were given by such people as General Sir Hugh Beach, John Grigg (Lord Altrincham), Enoch Powell and others.  It is clear that the 1971 visit inspired Prince Philip to learn more and it is a measure of his high intellectual ability that he personally wrote and delivered such a first class lecture.

HRH attended the Gallipoli Association Annual Dinner in 1975 as the Guest of Honour at which he gave an immensely thoughtful and powerful speech before proposing the health of the Association.  I strongly recommend everybody to read that speech which was produced in the Winter edition of the Gallipolian No. 19 1975.  The speech opened with the following words: “The future generation, I am afraid, will only know of Gallipoli from the history books, and there, I am afraid, it will suffer the same fate as so many other great battles of the past. It will be entered simply as 'Gallipoli, 1915', just like Agincourt 1415, or perhaps Balaclava, 1854.”

These sentiments must have been in his mind when he told me some years later that he was so pleased that The Gallipoli Association had decided to allow Associate Membership, opening the doors to others who had not served in the Campaign, and was highly critical of another campaign-orientated WWII association which had refused to do so thus ensuring its ultimate demise.  He strongly felt the importance of maintaining interest in a campaign so historically significant as Gallipoli, with all the multitude of lessons, at once political, strategical, tactical and examples of courage and human endeavour that it still offers today.

In 1982 possibly the most significant event in the history of The Gallipoli Association occurred when His Royal Highness agreed to become our Patron.  The benefits of his patronage cannot be underestimated.  It was not just the fact that we now had Royal endorsement, but also the enduring interest which our Patron took in our activities and our future.

1995 brought the 80th Anniversary of the Campaign and it was decided that, as there was no memorial anywhere to the Campaign as a whole, the Association should endeavour to have one erected in a suitably prominent place.  The Registrar and Chapter of St Paul’s Cathedral were extremely helpful and welcomed the idea of having the memorial in the cathedral.  Accordingly our Patron was approached for his help.  This was generously forthcoming and he wrote a Foreword to the Appeal brochure.  His patronage undoubtedly contributed hugely to the success of the appeal which raised not only enough to pay for the memorial but left us with a sum significant enough for the Association to start the idea of giving bursaries to enable people to visit Gallipoli and learn about the Campaign.  He kindly agreed to unveil the memorial at St. Paul’s Cathedral on 28th November after which he insisted on walking from the Cathedral to the reception at Stationers’ Hall much to the astonishment of members of the public as they went about their business.  Prince Philip was amazing the way he went round talking to everybody present at the reception and he gave so much pleasure to every single person there.

Photos: HRH standing by the memorial and the other of him handing out certificates to the eight veterans, accompanied by Christopher Fagan and Hugh Jenner.  Names of the veterans could possibly be provided. 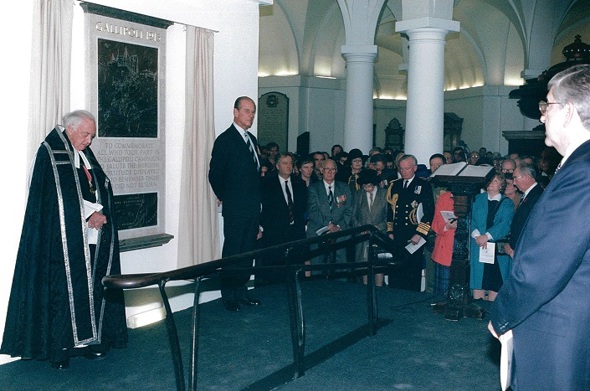 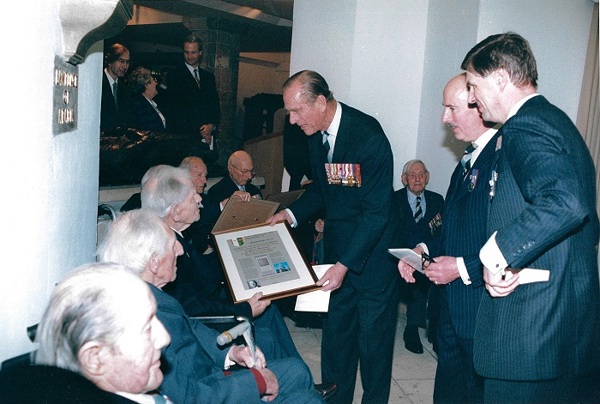 To mark the 90th anniversary in 2005 Her Majesty The Queen and His Royal Highness agreed to lay wreaths at the Sandringham War Memorial after Morning Service at the church on Sunday 16th January.  This was attended by quite a crowd and The Queen and HRH talked to a large number after the wreaths were laid which made it such a memorable occasion for so many.  They were most intrigued to be shown the pocket watch in the possession of the Beck family. This had been presented to Major Frank Beck, who was the Sandringham Estate Agent and Commander of the ill-fated Company of the 5th Norfolks, by Queen Alexandra before he took the Company to Gallipoli where it famously disappeared into the smoke, never to be seen again.  The watch was later found to be in the possession of a Turkish Officer who was ordered to return it to the family by Kemal Ataturk.

On Gallipoli Day, 25th April 2005, His Royal Highness came to St. Paul’s Cathedral and laid a wreath at the Gallipoli Memorial, and then, together with Her Majesty, went on to lay wreaths at the Cenotaph and attended the service at Westminster Abbey.

In addition, to mark the 90th anniversary still further, Prince Philip arranged for us to be given permission to hold a reception at St. James’s Palace on 7th June 2005, for which Royal approval and attendance is required.  This was yet another memorable and happy occasion which he attended and spent just over an hour going round and speaking to virtually every one of the 200 people there.  He always took particular interest in people who had had a family connection with the Campaign, and there were many jokes as can be seen from the large number of photographs taken at the time.

Five years later, to mark the 95th Anniversary, Prince Philip attended our Autumn Lunch at the Naval Club and yet again took time to talk before lunch to as many people as possible.  I seem to remember that he was attending no less than five different engagements that day.

And then came 2015, the Centenary of the Campaign.  By this time the Association had been granted Charitable Status.  His Royal Highness very kindly, once again, agreed to support our 100th Anniversary Memorial Appeal by writing his own Foreword and sending it to us together with a photograph which we had requested of himself in Naval uniform.  This gave us the impetus to be able to raise over £75,000 from many sources which is being used to educate the public in many different ways about the Gallipoli Campaign.  At the same time a grant of £100,000 was made to the Association by the Heritage Lottery Fund. 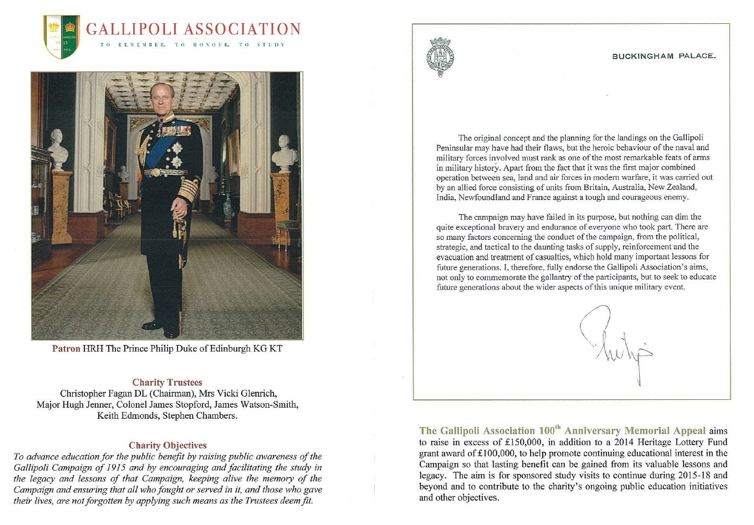 Prince Philip then attended the Autumn Lunch at the Cavalry & Guards Club on 27th October.  Before lunch he made his way round the 80 people present in his usual jovial way and, at the end of lunch, he proposed the loyal toast to Her Majesty, and listened to the speech that followed by Sir Hew Strachan. 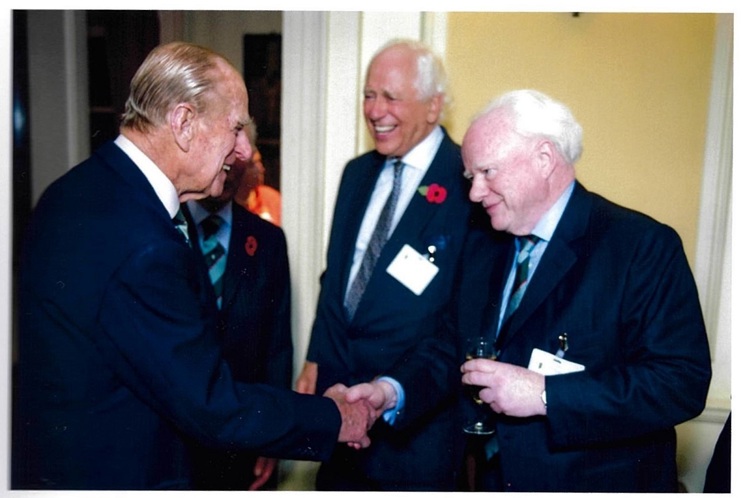 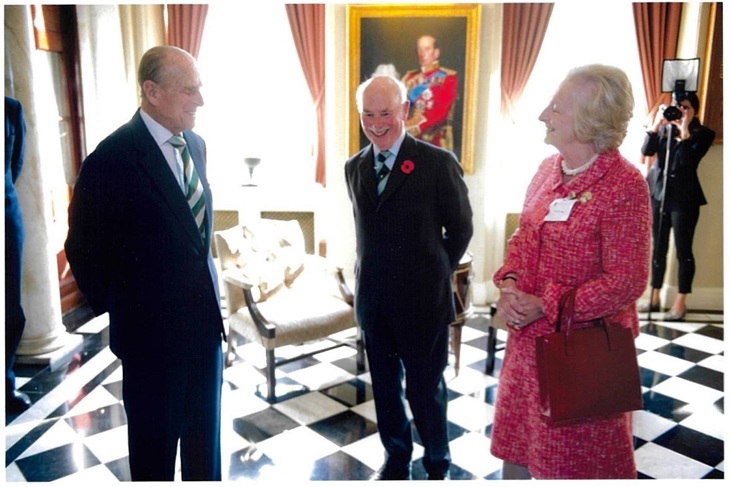 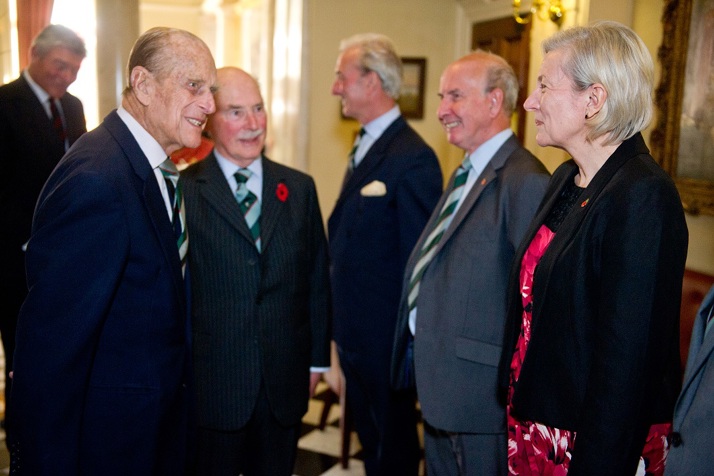 To mark the 100th anniversary of the final withdrawal from the Peninsula Her Majesty The Queen and His Royal Highness graciously agreed to lay wreaths at the Sandringham War Memorial after Morning Prayer in the Church.  This was the finale of the Centenary commemorations and was also attended by The Duke and Duchess of Cambridge.  Her Majesty and His Royal Highness were able to talk to many members of the Association and public who attended.  They were shown Major Beck’s watch once again.

Photos: HM The Queen with President Christopher Fagan HRH Prince Philip with Dame Mary Fagan; and TRH The Duke and Duchess of Cambridge. 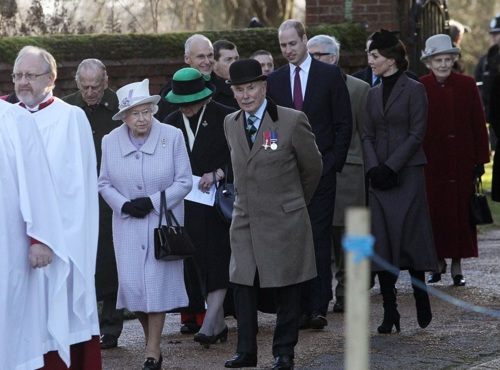 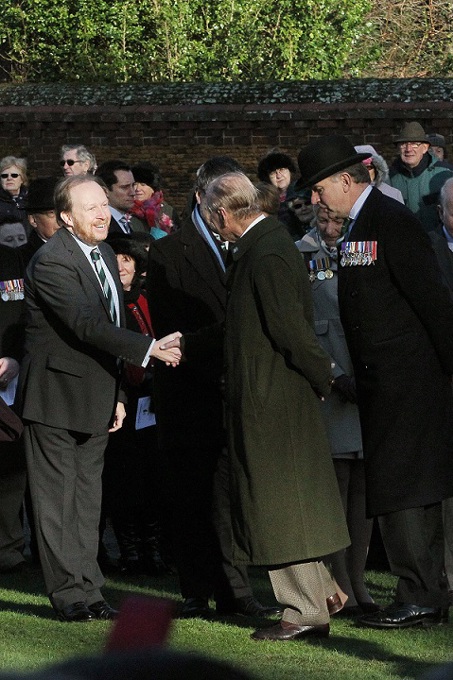 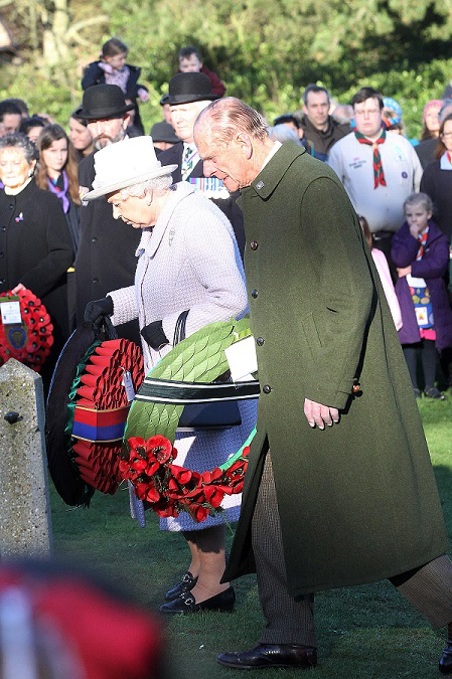 Mention must be made of the fact that at the Field of Remembrance at Westminster Abbey, Prince Philip always made a point of coming to the Association plot even if he had to cross over from plots on the other side of the path.  When one thinks of the number of organisations and plots that he must have had a connection with, it is a mark of his extraordinary ability to remember where they were, and the interest he always showed in them.

When I was Chairman he would summon me to have an audience with him at Buckingham Palace where he would expect to be brought up to date with the affairs of the Association.  He would ask pertinent questions which showed great knowledge of the subject and would always encourage and make helpful suggestions.  He was very supportive and enthusiastic about the idea of making the Association a registered charity and realised that this would help to ensure that the Association would endure for many years to come, which he felt was so important from a historical and educational perspective.  He greatly applauded all the activities that we were pursuing including educational visits to Gallipoli for old and young alike, and those who wished to further a military career.

Brigadier James Stopford and myself were very honoured to be summoned for an audience with His Royal Highness at Buckingham Palace to mark my handover of the Chairmanship to James.

There is no doubt that the fact that Prince Philip agreed to become our Patron, has given the Association a recognition that it could not otherwise have had.  This might have been enough in itself, but he made so much more of it by his obvious encouragement and interest in the Association, the Gallipoli Campaign itself, and his foresight in seeing how important it is to ensure that the Campaign should not be just “known from the history books” and “suffer the same fate as so many other great battles of the past” and “entered simply as Gallipoli 1915”.

And so, Sir, we thank you from the bottom of our hearts for all that you have done for us.  Our loss is immeasurable and we will miss you, your interest, wisdom, encouragement, and certainly your humour, more than we can ever express.

I know that I speak for all members of the Association in sending our profound condolences to Her Majesty The Queen, and all the Royal Family.

People will have seen that that the public have been asked to refrain from leaving flowers as their mark of respect, but rather to send a donation to a charity of which he was Patron.  If, therefore, you would like to make a donation to The Gallipoli Association it will be most gratefully received. When making a donation please ensure yo uput your name or membership number as a reference. Thank you.