HONOUR AND MEMORIAL CEREMONIES FOR THE GALLIPOLI CAMPAIGN PARTICIPANTS LEMNOS

Once again, same as every year, the local authorities of Lemnos Island, organized the very emotional ceremonies for those who used its soil as a base for the Gallipoli Campaign in 1915.

The ceremonies were held at the 20th of April on both West and East Moudros Commonwealth Cemeteries as well as on two other places of importance; at the same time various parallel events took place. 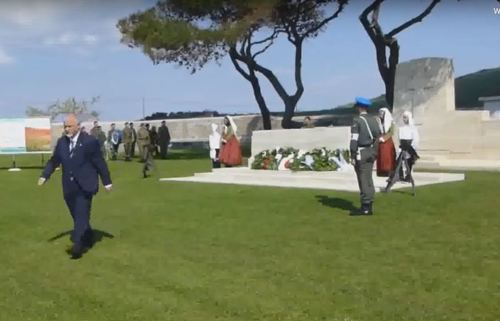 The analytical program was as follows:

At 10:30 (local time) a religious memorial service was held on West Moudros Commonwealth Cemetery at the village of Portianou, very close to the Turks Head peninsula where the field hospitals and some of the military camps were installed.

The local political and military authorities along with representatives from the Commonwealth Embassies attended the ceremonies.

Wreath laying followed; this year The Gallipoli Association returned to lay a wreath. The military band performed the national anthems of the countries represented and the morning came to a close with a visit to the local folklore museum.

At 13:00 the participants visited the “Australian Pier”, the very first construction made by the expedition Corps to assist the disembarkation of the troops and the supplies needed for the campaign and flowers were placed at the remembrance plaque.

Another plaque lies at the main harbour of Moudros, with a short description of the events of Gallipoli Campaign; there flowers were placed as well.

At 16:00 ceremonies reached their climax in East Moudros Commonwealth Cemetery with memorial service and wreath laying by representatives of the Greek Government, local and regional authorities, the Military Commander of Lemnos, the representatives of the countries involved, a lot of Lemnian Organizations and organizations from Australia and U.K. – the Gallipoli Association included.

The wreaths were laid at the central monument of the Cemetery which was flanked by boys and girls of the local cultural association dressed in traditional costumes while a Hellenic Army Platoon presented arms.

The national anthems were once again performed by the military band and the ceremony ended with a minute’s silence while a trumpeter played the dead march.

The final event was held at Moudros Cultural Club, where short speeches from the local authorities and by the representatives of Embassies were addressed and the Historian Mr. Palavouzis presented “The role of Airborne Operations during the Gallipoli Campaign”.

The Gallipoli Association sends a huge thanks to Dimitris Boulotis for representing the Association on this important annual occasion in Greece. This was a wonderful and such a fitting remembrance this year.

For film of the event please see: https://www.youtube.com/watch?v=CbUlBpYG5yo

The ceremonies closed with a small reception during which memorabilia were presented to the participants of the celebrations.