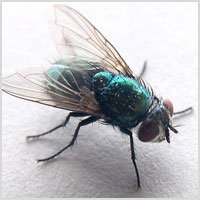 "It really is the limit in the firing line - what with the heat, the flies, the smell and lack of sleep. The absolute maximum of sleep one can get at night is 2 hours, for officers are at least 2 hours on to 1 off, and everybody stands to arms at 3 am. After an advance too, there is a tremendous lot of work to be done, improving trenches and making new ones. The bringing up of supplies and water alone is a very heavy job - water for the firing line takes between 2 and 3 hours to bring up. In fact, after a couple of days, one gets into a state of complete exhaustion and stays in that conditions until relieved."

Lieutenant George Horridge had much to say in his memoirs on the conditions of service in the sweltering trenches at Helles. The flies far a start were simply awful.

"A species of green bluebottle but smaller than our English bluebottle, with green bodies. After the battles of June 4th - 6th the land in between the trenches was covered with dead. The flies bred there until their number was tremendous. At night they lived on the dead and in the daytime they buzzed, just around our trenches. All the trenches were covered in flies like a swarm of gnats that one sees in the garden in summertime. They attacked our food remorselessly. In order to eat one had to wave one's hand about just over ones food and then bite suddenly, or a fly was in with it. Any bit of food uncovered was blotted out of sight by flies in a couple of seconds. This was frightfully trying and the contamination made everyone ill."

It wasn't only the flies. Soon most men were suffering from body lice. The itching was awful.

"Body lice were transferred from one to another in blankets. They were very hardy and no amount of washing clothes in the sea would get rid of them. When things were quiet of a morning the men would get their shirts off and have a delousing session. The method was to squash them between their thumb nails. I only had them for a few days. My method was simple. My mother sent me a parcel every week containing a shirt, vest, pants, piece of chocolate and some pipe tobacco with paper and string all sewn up in a parcel made from calico and sewn up in the works at Bolholt. I changed clothes and sent' the dirty ones back tied up in the paper and string from the parcel I had received. So I had a change of clothes every week! I didn't have any creepy crawlies afterwards."