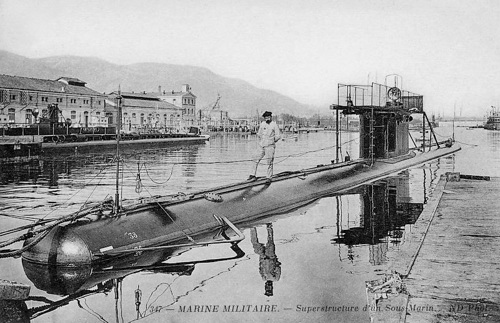 Lieutenant Henri Fournier, courtesy of : http://ecole.nav.traditions.free.fr and the Saphir (c.1910)

“[…] leaves base at 06.00 hrs to attempt a break-through to the Sea of Marmara. The submarine passes under the mine barrages without incident and surfaces to periscope depth off Nara. Here it is sighted by the motorboat Çanakkale, gunboat Isa Reis and minelayer Nusret. The boats open fire on the diving submarine. While taking avoiding action, Saphir hits the bottom and the glands and riveting, hastily repaired at Malta some weeks previously, open up. Although the submarine comes free, the flooding cannot be stopped and it sinks again to the bottom at some sixty-six metres. With the batteries now leaking badly and poisonous gasses, spreading rapidly, the captain has no alternative but to surface and surrender. Nusret comes alongside and rescues thirteen of the twenty-seven crew members before the submarine sinks again. Lying 300 metres off the coast at a depth of over thirty metres and in a strong current, the submarine proves impossible to salvage.”