HELLES - It had been decided that it would be easier to organise and control the evacuation procedure if the soldiers concerned were all of one nationality. Thus it was thus decided that the French would be withdrawn entirely and the Colonial Brigade duly departed on the evening of 1 January 1916. Behind them the French left only their artillery batteries and a small party of sappers who were engaged in dismantling the Decauville light railway. 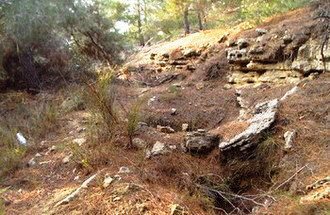 Left: A modern day photo of a collapsed dugout in Kerevez Dere.

Sapeur Gaston-Louis Giguel, 1st Régiment du Génie was one of the few Frenchmen left behind.

"The firing scarcely stopped all night at the front. I was a little afraid. We can no longer receive messages; things are getting desperate. How long must we remain here? We are being well shelled from Europe and Asia; the whistling and rumbling of the shells passage followed on without a gap, falling more or less everywhere but mainly on the beach from which we must be evacuated. I envy my comrades who have already left." (Sapeur Gaston-Louis Giguel, 1st Régiment du Génie, CEO)

After the reshuffle the Helles garrison consisted of the 13th Division on the left, then the 29th and 52nd Divisions in the centre, and finally the RND who had moved across to take over the Kereves Dere sector. This sector had contained some of the worst ground anywhere on the Peninsula. The French casualties in the first four months of the campaign had been horrendous; but it soon became apparent to the new residents that a ‘live and let live’ attitude had grown up since the campaign had stagnated back in August. Sapper Eric Wettern of No. 2 Field Company found it all a bit of a relief.

"In many ways this was a rather weird sector. The lines ran right down to the water's edge at a point where a fair sized and very precipitous gulley, the Kereves Dere, opened out into the Straits. Here our lines were at the bottom of the gully with the Turks looking right down over us on the other side. A little further inland the positions were reversed, our lines being on the top of the hillside, whilst Johnny was at the bottom. In both, cases the communication trenches running steeply down the hillsides, were in full view of the chaps opposite, without any possibility of protection, short of head-cover. By all the rules of the game the locality ought to have been an exceptionally unhealthy one, and a happy hunting ground for snipers and whizz-bang merchants on both sides. Fortunately however, our predecessors, jointly with Johnny, had devised a brilliant way out of the difficulty. On two trees between the lines, right down near the beach, wore two flags - one French; one Turkish. As long as nobody, from either side, ventured beyond those flags, there was to be no rifle fire during daylight hours in this particular region. The agreement was strictly adhered to with the result that this portion of the line was an absolute rest-cure. Wandering along the line, through an olive grove which it traversed, one found chaps placidly leaning over the parapet, or sitting on it. I succeeded in getting one or two photos of No Man’s Land by the simple method of strolling out in front of the line near the afore-mentioned trees. I, there and then, formed the resolve that if ever I should have occasion to run a private war of my own, I would organize it on similar lines!" (Sapper Eric Wettern, No. 2 Field Company, Royal Engineers, RND)