ANZAC - Brigadier-General John Monash, Headquarters, 4th Australian Brigade, NZ&A Division, AIF - A letter home from Monash gave a fine description of the evacuation arrangements as they were proceeding at Anzac on 16 December. 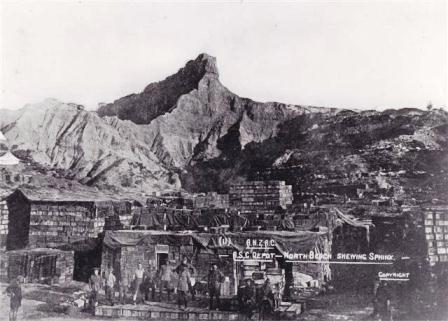 "The day passed quite uneventfully. We managed to get some baggage off today, as the wind has dropped and the sea is calmer. The total strength of Anzac has in the last four days been reduced from 45,000 to 20,000 and we shall continue to hold the lines against at least 170,000 Turks (ten divisions) until the second last day, and on the very last day we shall have only 10,000. Everything is working out, so far, most smoothly. Today for the first time, I took my staff and commanding officers into my confidence, and explained to them the outline of the general scheme, and the particular role each would have to play. The rest of the day I spent in preparing a complete draft of my final orders. In view of the steadiness of the barometer, and the generally favourable conditions, it has now been decided to carry out the operation of re-embarkation tomorrow and Sunday. Today, therefore, we had our final divisional conference, and took mutual farewells of each other. General Birdwood himself came over from Imbros, and specially picked my lines for a visit. He went along my whole line, and shook hands with all the officers and expressed the hope that they would come through alive. I have already sent off about 800 of the brigade, tomorrow. McGlinn goes with another 800, and on the last night I take the remaining 825. These, I have divided into three echelons or groups, the first 400, the second 255, the last of all 170 - moving respectively at 6pm, 10pm, and 2am. The last 170, or the 'die-hards' have been chosen from the most gallant and capable men in the brigade. Even these will not all leave the trenches in a bunch, but a few of the most daring men, who are good athletes, will remain in the front trenches and keep up fire for another ten minutes, and then will make for the beach at best possible speed. I am myself going with the first group of the last 170, as by that time the die will be cast, and I can do no good by waiting for the last small handful. The men, while very sad at having to give up the ground which has cost Australia so dear, are all keen, and I am quite sure that not a man in the brigade will move from his post, no matter what happens, until the last moment arranged for him to do so. It has been worrying me to think that, if we get clear away without much loss, the enemy will nevertheless represent the incident as a great victory for them, even to the extent of alleging that there has been a great fight and that have driven us into the sea with heavy losses and many prisoners. So I made it my special business to explain my apprehensions to General Birdwood, and he has promised me that as soon as possible after the completion of the operation he will cable to Australia and New Zealand in order an public anxiety as to the welfare of the Army Corps."