A review of Saturday's concert written by our events coordinator Hester Huttenbach:

"Not usually liking just a piano playing on its own, this concert was something special. Alex Wilson began each piece with a quote from Frederick Kelly’s diary.

The pieces he chose to play varied from peaceful to emotionally loud and were evocative of the period of time that he had composed for.

Alex encouraged the audience to close their eyes and let the music take over and with the excellent acoustics in the Cathedral it made for an emotive rendition of Kelly’s compositions." 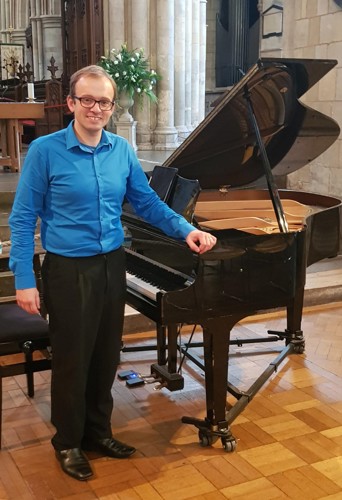 The soldiers and sailors who fought at Gallipoli were blessed with a generous share of artistic talents. They were volunteers and idealists, and they each packed their arts into their knapsack as they set out excitedly, for what many saw as the great adventure.

The Hood Battalion of the Royal Naval Division was perhaps endowed with more than its fair share of such talent. Rupert Brooke, William Denis Browne, Patrick Shaw-Stewart and Ivan Heald; all poets and writers. Denis Browne was also a musician and composer, as was his fellow Hood officer, Frederick Septimus Kelly.

Brooke died before reaching the shores of Gallipoli, and the Third Battle of Krithia took Denis Browne. In accordance with the latter's instructions, much of his music was later destroyed.

Shaw-Stewart, Kelly and Ivan Heald were luckier in so far as they all survived Gallipoli; alas, none of them survived the war.

Frederick Kelly was born in Australia and educated in England at Eton and Oxford, before going on to study music in Germany for five years at the Frankfurt Conservatoire.

Pre-war he conducted, gave piano recitals, played with Pablo Casals and helped organise concerts, including one where Maurice Ravel appeared.

Kelly was also a world class rower. He took up sculling while at Oxford and won the Diamond Challenge Sculls at Henley in 1902, beating Raymond Etherington-Smith in the final.

He rowed in the four seat for Oxford against Cambridge in the 1903 Boat Race. Oxford lost the race by 6 lengths.

Kelly went on to win the Diamond sculls at Henley again that summer, beating Julius Beresford in the final. He also won the Wingfield Sculls, the Amateur Championship of the Thames, beating the holder Arthur Cloutte. This was the only occasion on which he entered.

In 1905 he again won the Diamond sculls, beating Harry Blackstaffe. His time on this occasion 8 min. 10 sec. stood as a record for over 30 years.

Kelly's last appearance in a racing boat was in 1908, when he competed at the London Olympic Games. He was a member of the Leander crew in the eights, which won the gold medal for Great Britain.

The particular skill which he took with him to Gallipoli however, was composing. Kelly was in the habit of fully working out his compositions in his head, before he committed anything to paper.

Thus it is very difficult to say exactly when a specific piece of his music was composed. It is clear from his diary however, that even on Gallipoli where there was no peaceful rear area free from the noise of the guns or the prospect of being shelled, when his duties allowed he nevertheless still found it possible to work at his craft.

In the same attack which killed William Denis Browne, Kelly was wounded in the heel and sent to a hospital in Egypt. Once able to get about again, he found his way to a music shop in Alexandria and there he bought some blank music sheets and was able to practised his piano playing.

On 27th June 1915 his diary records that he finished his 'Elegy for String Orchestra in Memoriam Rupert Brooke.' This is a particularly fine piece, which can only have been composed on Gallipoli, and a recording of it is well worth seeking out.

On his return to the peninsula, Kelly made good use of his newly acquired blank music paper and by the time of the evacuation he had a collection of manuscripts worth taking care of.

That was certainly the opinion of Bernard Freyberg, who suggested that instead of going with his own gear, Kelly should put them in the orderly room strong box, which was in the charge of two men.

In his diary entry for 31 December 1915, Kelly offers his evaluation of his work to date: “I am still serving my apprenticeship in sonata form but in lyric form I feel I have every now and then said something good and original, for example my monographs in E Flat Major, B Minor, C Minor and my studies in F Major and D minor. I had no time to put in phrasing, nor expression marks and the indications of tempo are of the scantiest.”

Kelly's Twelve Studies, Op.9, were written between 1907 & 1913, and reading the above diary entry it is tempting to think that he was perhaps still improving and polishing these pieces while he was serving on Gallipoli.

That may certainly hold true for some of his Twenty-four Monographs, Op.11, which were composed between 1911 and his death on the Somme in November 1916.

In April 2019, the pianist Alex Wilson recorded all of the above 36 pieces; a great achievement, as this is the first time that these works have been recorded together in their entirety.

From those recordings, Toccata Classics of London have produced a very fine CD [TOCC 0524] which was released on 5th June 2020, and which is highly recommended.
[https://toccataclassics.com/product/frederick-septimus-kelly-piano-music/]

Last year's launch of the CD was, like everything else, adversely affected by the pandemic, however it is planned that in the coming autumn a short series of concerts will take place featuring Kelly's works.

This programme commenced with a solo piano concert at Southwark Cathedral, London on Saturday October 30th 2021.

The concert celebrated the life and music of British-Australian composer, pianist, war hero and Olympic rower Frederick Septimus Kelly. It also featured the world premiere of 'To Dear Cleg' by Sadie Harrison: a love letter to Kelly, a homage to the composer through a series of short pieces based on extracts from his diaries.

Further concerts are planned for Gloucester and Exeter so hopefully you will be able to attend one of these at your convenience.