Members and their guests of the Gallipoli Association met at the Royal Air Force Club, Piccadilly on Saturday 23 October for the 9th Annual Conference. This was our first conference since the lifting of Covid-19 restrictions in the summer and Tom Iredale and Stephen Chambers did an outstanding job in meeting the challenge of organising the event and finalising the programme of speakers.

Lieutenant Colonel Mike Tickner, a Regular Army officer with an interest in the British Army in India, opened proceedings, seeking to answer the question: Who Were The 29th Indian Brigade? The names of 1,500 of these men are found on the Cape Helles memorial but their contribution is so often overshadowed. Mike emphasised the diversity of the Indian Army in 1914, but said the Army was not equipped, nor trained for general warfare and was not an expeditionary force. Furthermore, the regiments at Gallipoli were largely illiterate. One of the reasons why the Indian Army was sent to Gallipoli was the vested interest in the Suez Canal zone, as well as Aden. Mike pointed out that General Sir Ian Hamilton had wanted the 29th Indian Brigade to be an all-Gurkha force, yet Hindus, Muslims and Sikhs all fought at Gallipoli, adding colour and interest to the campaign. 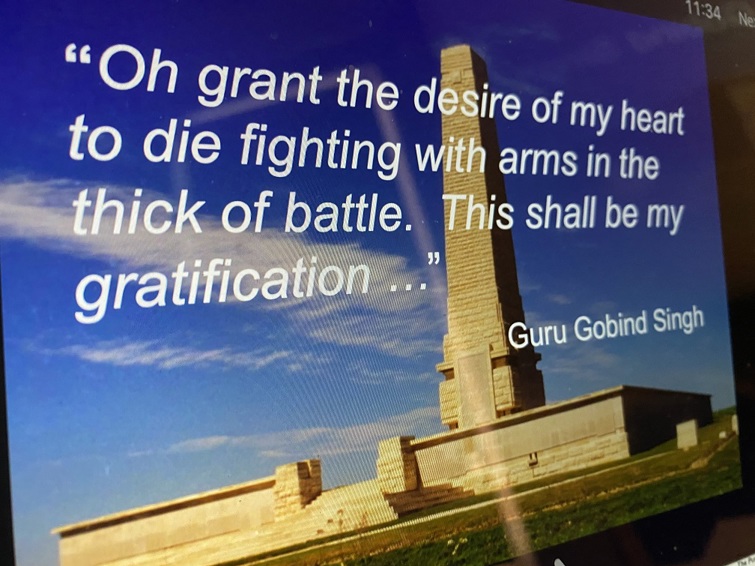 Our second presentation was by Dr Chris Martin, Reader in Maritime Security and Head of School of Politics and International Studies at the University of Hull. His subject was Franco-British Naval Cooperation at the Dardanelles, 1914-1916, new friends, old enemies, eternal rivals?, This was an academic paper undertaken with experts from the University of Lille and the University Du Havre. The focus was on the friction between Britain and France. Chris said that from the outset, as far as the British were concerned, the Royal Navy simply did not require the assistance of the Marine nationale, and whilst overtly cordial, relations between British and French officers were marked by deep-rooted antipathy and prejudice. French participation at the Dardanelles had not been received with much enthusiasm and French disillusionment had set in early. An indifference to French sensitivities had continued until the start of the Gallipoli campaign. Chris highlighted the British sense of superiority, and said that in theatre, the problem for the French was that Britain controlled communications. He summed up the presentation by concluding there had been no equality of partnership. ‘We are eternal rivals’, Chris said. 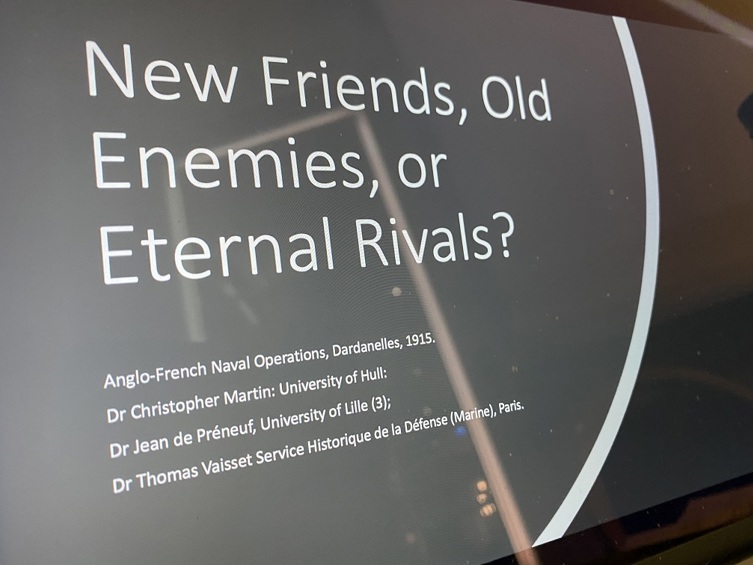 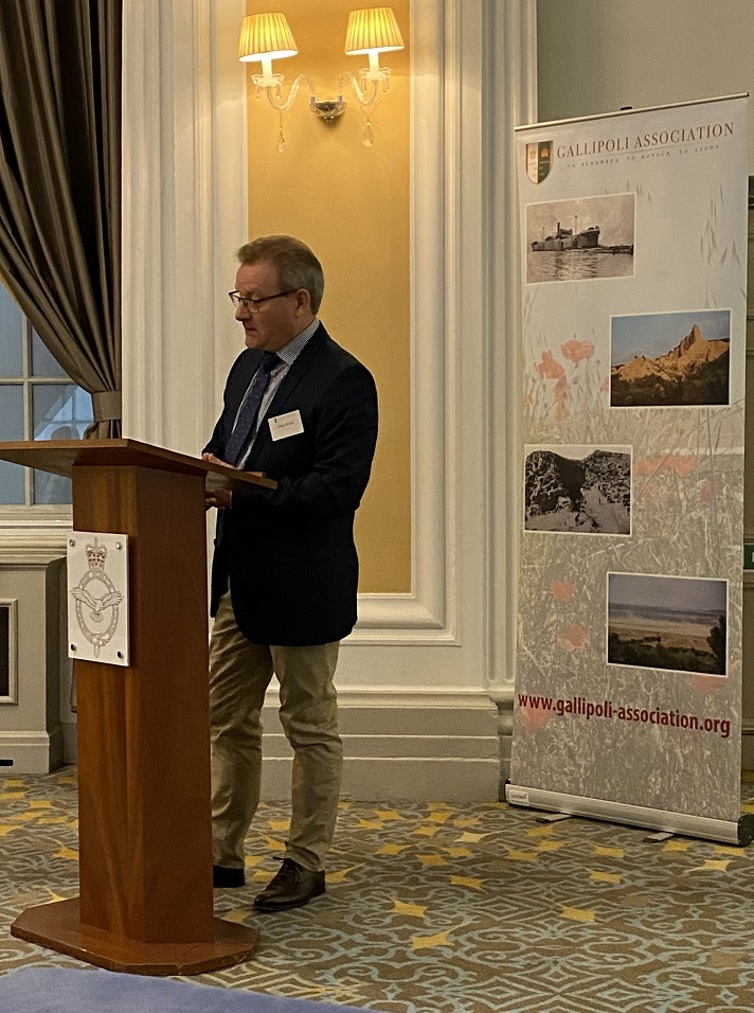 Michael D Robson has been a member of the Gallipoli Association for 28 years and is the grandson of a veteran in the Royal Naval Division. He is a regular visitor to the battlefields on the peninsula and lives in Israel. So, it was a delight to see him at this year’s annual conference and listen to his talk on Trumpeldor, Patterson & the Zion Mule Corps. The starting point was the declaration of war between Russia and Turkey, when thousands of immigrants living in the Holy Land were given the choice of either becoming Ottoman subjects or their expulsion as enemy aliens. Those who chose the latter course ended up in Egypt. Michael gave an insight on how they wanted to form a fighting unit to take on the Turks. However, the British High Command in Egypt only offered them a support service role which became the Zion Mule Corps. Once they had landed on Gallipoli, the handlers and their mules worked tirelessly to move supplies and ammunition to where they were needed. ‘They did excellent and merciful work throughout the campaign,’ Michael added. Several of the members were awarded the Distinguished Conduct Medal and mentioned in dispatches. 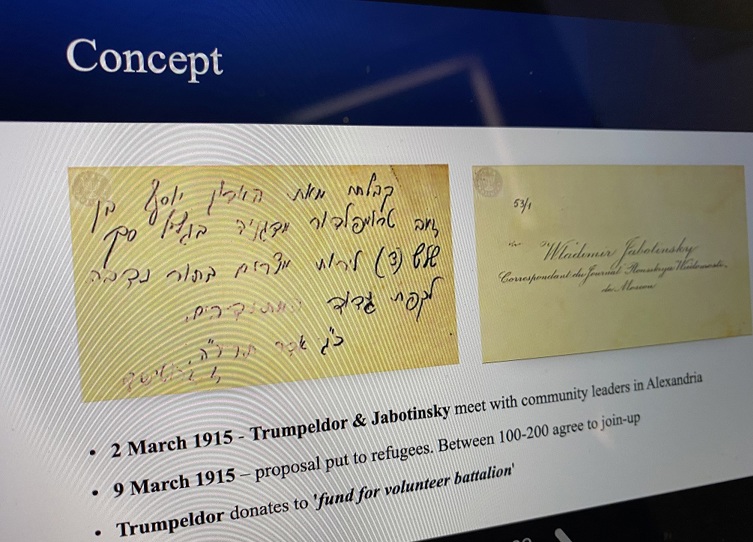 Gallipoli Association historian, Stephen Chambers, then took the opportunity to remind members of the forthcoming Gallipoli Battlefield Tour in May 2022. The schedule, he said, would of course feature not one battlefield, but four of them: the Dardanelles, Helles, Anzac and Suvla. There is plenty to whet the appetite, with cemeteries, old trenches, flora and fauna, as well as forts and historical finds. After the travel disruption caused by Covid-19, Stephen clearly relishes the chance to get back to the peninsula, and is also promising something new for 2022: Underwater Gallipoli. 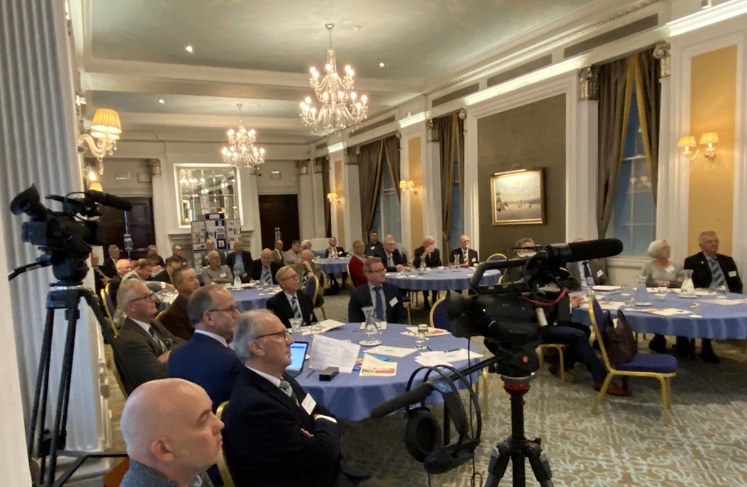 The final speaker of the day was Mike Crane, a Gallipoli Association member for the past 11 years, who has established a reputation for his survey work, mapping the Helles battlefield. Three years ago, Mike showed the conference how combining contemporary maps - including battlefield maps - with Google Earth, allowed further study of the battlefields. In a series of personal reflections titled The Gallipoli Whistle, Mike again highlighted the poignant story of the Bolton Brothers, whose great-nephew, Lord Hacking, attended this year’s conference. Adam Sutcliffe, the grandson of Captain Herbert Sutcliffe, 10th Manchesters, then attended the stage to join Mike in the story of the Gallipoli Whistle. The whistle, once used by his grandfather during the Third Battle of Krithia, was blown to fitfully end this wonderful talk.

In closing the event, the Gallipoli Association Chairman, Brig James Stopford, warmly thanked the RAF Club for its hospitality and all those involved in making the annual conference a success after the two-year break. 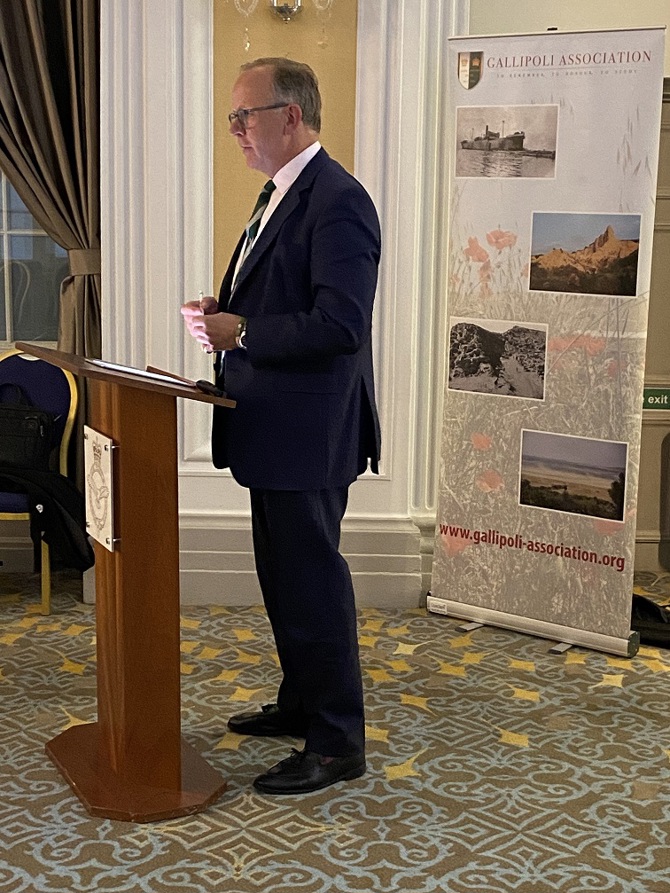