The Gallipoli Association was represented at a service and wreath laying ceremony, arranged by the Australian and New Zealand High Commissions, at the London Cenotaph on 25 April 2016. Some 40 Association members, many of them with family links with the Gallipoli Campaign, took part in the Parade which stepped off from King Charles Street at 10.45am.

The Association was also invited by the High Commissions to take part in the Service of Commemoration and Thanksgiving which was held in Westminster Abbey at noon.

A Dawn Service, organised by the High Commissions, was held at 5.00am at the Wellington Arch, Hyde Park Corner followed by wreath-laying at the nearby Australian and New Zealand Memorials. Many Gallipoli Association members attended this service.

The Gallipoli Association also organised a short wreath-laying service at 9.30am at the Gallipoli Memorial in the Crypt of St Paul’s Cathedral. Wreaths which was laid by Mr Mark Lancaster, Parliamentary Under Secretary of State for Defence Personnel and Veterans, on behalf of Her Britannic Majesty’s Government, by senior representatives of the Royal Navy, the Army and by the High Commissioners of Australia and New Zealand, and other high ranking officials from France, the Republic of Ireland and Turkey

The Association was also represented at a number of local services held on or around 25 April and at other dates which mark the anniversaries of significant battles during the campaign.

Patricia Aubrey writes - My Uncle, Albert Auerbach, was born in Kingswilliamtown, South Africa of British parents, in 1894.  The family returned to England in 1897. He enlisted in the Royal Fusiliers (City of London Regiment) in September 1914 and was commissioned in July 1915. He served at Gallipoli from November until the evacuation of Suvla Bay in December.  After Gallipoli, he served on the Western Front during the Battle of the Somme.  He was invalided home in December 1916 but re-joined the Royal Fusiliers In June 1918 and served again on the Western Front until 1 September, 1918 where he was killed in action at the age of 24 years.  He was awarded the Military Cross posthumously for his gallantry.

Charlotte Mitchell writes - My grandfather, Capt. C.C.R. Black-Hawkins, was born on 4 May 1879.  He was in the Regular Army and served in the Boer War in the 3rd Battalion of the Hampshire Regiment.  At the outbreak of the First World War, he was stationed at the Regimental Depot in Winchester and sailed for Gallipoli in July 1915, landing at Suvla Bay on 6th August.  He was killed 4 days later.

Alex Burgon writes - My father, Cpl. 4372.  James Mursell Burgon,  was born in 1892 at Berwick-on-Tweed and worked  as a country blacksmith.    He enlisted in January 1915 and served with the 22nd Veterinary Section 11th Division in Egypt and Gallipoli,  and later in the Ypres sector on the Western Front.   He was demobbed in March 1919.

Tim Chamberlin writes - 2520 Pte. Walter Chamberlain (a mis-spelling of the true name) was the son of Walter Chamberlin of Fox Lake, Aylesham, Norfolk.   He joined the 1/5th Bn. (Sandringham Company) of the Norfolk Regiment and landed with the battalion at ‘A’ Beach Suvla on 10 August. He was killed two days later during the attack on Turkish positions. He has no known grave and is commemorated of the Helles Memorial to the Missing.

Rhys David writes - my father, Sapper Dewi David, joined the Royal Engineers as a sapper in Cardiff on 1 March 1915, his 17th birthday! He was assigned to the Welsh Divisional Signals Company and reached Gallipoli in August to serve with the 53rd (Welsh) Division. He took part in the evacuation from Suvla on 13 December, leaving from ‘A’ Beach on HMS Rowan. He later served in Egypt and Palestine, returning home in March 1919.

Captain P.A.C Harland OBE, RN. writes - My uncle, Major Godfrey Barker, Royal Marines Light Infantry was the 5th son of the late Colonel Sir Francis and Lady Barker, my mother’s brother.  He was Adjutant, Drake Battalion, Royal Naval Division. The battalion had been held in reserve after the initial landings on Gallipoli on 25 April 1915, but were ordered to reinforce Cape Helles at 2030hrs on 26 April landing on W Beach from SS Franconia. Major Barker was killed three days later.  He is buried at Twelve Tree Copse Cemetery.

Ginny Edwards writes: My great uncle 508 Private Joseph James Knight was born in Shoreditch, East London. He later emigrated to Adelaide, South Australia and at the outbreak of war enlisted in the 10th Bn., Australian Infantry, Australian Imperial Force. He was killed in action on 13 August 1915, aged 27. Last year, I was the first family member to visit his grave in Lone Pine, Cemetery, Anzac.

David Mason writes – I had three relatives who served at Gallipoli. My uncle, Raymond Mason joined the 1/1st County of London Yeomanry and s service in Egypt, he arrived at Suvla Bay, Gallipoli in August and took part in the attacks several weeks later. He was evacuated, sick, to Malta in September and later saw service in Salonika . He survived the war and went on to serve in the Home Guard in the Second World War.   Another uncle, Charles Lyon, joined the 1st Battalion, Essex Regiment and after training embarked at Avonmouth for Gallipoli in March 1915. The battalion landed at Cape Helles on 25 April. Charles took part in a number of actions in the Helles sector and later at Suvla in August 1915. He was remained on the peninsula until the evacuation from Helles in January 1916 after which the battalion were sent to France. He was killed at Guedecourt on 12 October 1916.   Another family member, Rodney Barker served in the 4th Battalion of the Northamptonshire Regiment and landed at Suvla Bay in August 1915 and remained there until the evacuation in December 1915. He went on to serve in Egypt and Palestine. He survived the war and died in in 1974

James Watson Smith writes - My Great Uncle, Colonel Edmund Percival Smith, commanded 17th Brigade Royal Field Artillery.   A ‘Regular’ he had previously served in India and South Africa.   He landed in the afternoon of 25 April at’ W’ beach and was killed during the Turkish night attack on 1st/2nd May. The Brigade War Diary records: ‘Went with his Adjutant, Captain Morgan and a Gunner ( Payne) to see how matters were faring in the Infantry trenches when they were all shot and killed’.

He was 51 and is buried in Redoubt Cemetery. He left a widow and 10 year old daughter. 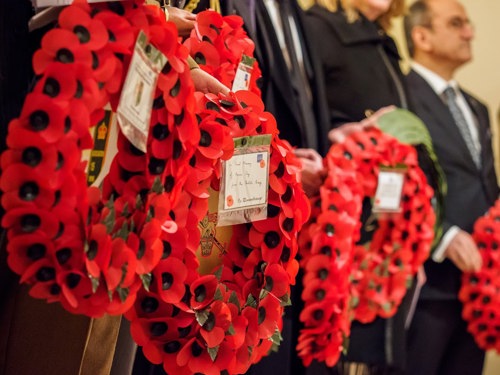