The congress centre of the Çanakkale Onsekiz Mart University was packed with 1,300 students attending the conference, titled “Perspectives of the Gallipoli Campaign”. After everyone stood up for a minute’s silence and then sang the Turkish National Anthem, the conference was formally opened by the Rector of the University, Professor Yücel Acer. Following his opening remarks, the speakers, already seated onstage, were introduced. 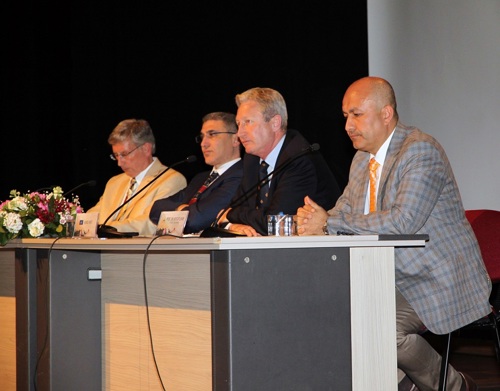 Edward spoke first and his subject was "Ottoman Military Effectiveness in Gallipoli 1915”. The talk was translated by Professor Uyar. Next was Dr Yildiz, who spoke about the “Gallipoli Campaign and lessons learned from the viewpoint of the United Kingdom”, but only in Turkish and no synopsis given in English. Then GA member Klaus Wolf (4) started his talk entitled “The German Factor in Gallipoli 1915” and made his opening remarks in pretty good Turkish, which went down well and he got a round of applause. Launching into English, he said it would be better to just talk in English, without translating – or “you will all still be here tomorrow”. Last to speak was Professor Uyar on the topic of “25 April 1915: Examining the Landing and Coastal Defence”, again all in Turkish and no English summary. Then a barrage of questions came and they all seemed to be directed at Edward and Klaus. Lively interest in the topics centred on the Gallipoli Campaign was shown by this young audience, who hopefully will carry forward aspects of this Campaign from different perspectives. That the whole event was a great success, Buğra Terzi, of the Çanakkale Savaşları Enstitüsü, surmised that the high turnout was probably due to the participation of foreign speakers.

Çanakkale Onsekiz Mart University, founded in 1992 currently has a student population of 49,000 and several campuses spread widely around Çanakkale.  The name of the University, “Onsekiz Mart”  means “18 March” commemorationg the Turkish victory over the Allied fleet on that date in 1915. The University is now one of the key economic factors of the town.